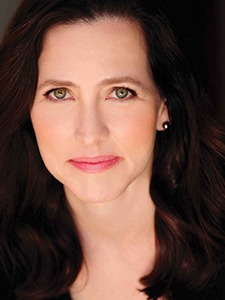 Ursula is an actor, director, and producer who wrote, directed and performed in the award-winning comedy, THE HAPPIEST DAY OF HIS LIFE which won a Viewer’s Choice Award on MTV’s LOGO Channel, and qualified for the Academy Awards. The LA Times called it “A delightful gender-switch comedy.” Other writer/director credits include the upcoming short about parenting and gender, WE TREAT THEM THE SAME, as well as the mini-docs about SWIM WITH HEART, a charitable organization in LA that helps children with special needs gain life skills through swimming.  Burton also regularly directs audio dramas, including the cult favorite DARK SHADOWS.

A graduate of Yale and working as an actor in Los Angeles and London, Ursula has had recurring roles on GREY’S ANATOMY, HART OF DIXIE, RAKE, THE WAR AT HOME, THE OFFICE and the hit BBC sitcom MY FAMILY.  Her other TV work includes roles on SILICON VALLEY, JANE THE VIRGIN, CASTLE, BLACKISH, SCANDAL, CODE BLACK, 2 BROKE GIRLS, THE MIDDLE, CRIMINAL MINDS, WILFRED, THE GHOST WHISPERER, and THE BOLD & THE BEAUTIFUL.  Film roles include the astronaut wife Marilyn Lovell in MOONSHOT, SGT. BILKO with Steve Martin, CHAIRMAN OF THE BOARD with Carrot Top, Jane in JUST FRIENDS, MAFIA directed by Jim Abrahams, and THE DIVINE SECRETS OF THE YA-YA SISTERHOOD directed by Callie Khouri.  Her audio drama work includes starring roles on BBC Radio 4’s Classic Serial production of “The Hireling,” as well as DOCTOR WHO, DARK SHADOWS, and STARGATE for Big Finish Productions.  After producing and acting in the long running Los Angeles premiere of the musical, A…MY NAME IS ALICE, she co-founded FIVE SISTERS PRODUCTIONS.

Burton sits on the YaleWomen Council, is a board member of both YaleWomen LA and the Yale Club of LA, and is a member of the Alliance of Women Directors.