HOW TO HAVE YOUR CAKE & EAT IT TOO.
Today was the first day of shooting, and I have never seen such exquisite cakes as in Topozios, the cake shop where we shot the wedding planner meeting montage & the final scene of the film. The owners (designer & business manager) are remarkably talented. There is a cake commemorating Smoky The Bear’s anniversary –it’s about 4 or 5 feet tall and green, the frosting like a forest. A number of cakes are decorated with gold leaf. Edible Art.

Jared Hillman, who is playing the groom, did most of the scenes shot today –much of it was a montage about his preparations for the wedding (trying on wedding suits, etc.). Later in the day, Jill Eikenberry & Michael Tucker arrived. Their flight was delayed, so they arrived just in time for lunch. Meanwhile we worked with the effects supervisor from Modern Video Film, David Carriker, to rig the wedding album for the opening scene.

There was the usual getting-to-know-each-other activity among the crew –everyone busy doing her/his job, but then also checking out who’s doing what elsewhere, what their names are, etc. A number of people have actually worked together before, so that adds a nice feeling. There was one grump on the crew, but the grumpiness faded as the day went on.

The camera department is all women. I’ve never seen that (I’m sure few have). They are all terrifically experienced and talented. The cooperation between the camera crew & the G&E (grip & electric –the people who set the lighting, dolly, etc.) is working well already.

People’s energy is up for the first day of the shoot — lots of production work & problem solving (where to set up the food? where are the wedding rings? we need more milk. we’re missing part of the dolly order & we need it right now.) Jennifer & I drove to the dolly house (Fisher) to pick up the dolly. We can only carry it in the grip truck, which means we need to clear that with the gaffer, then change the dolly order to pick it up earlier, then drive the 17 foot truck through Los Angeles (including about a quarter mile on the freeway — consisting simply of crossing 6 lanes to the first exit — we took surface streets on the way back). Jennifer figured out that we could save a day’s rental if we wait for the dolly an hour, so we do. I enjoy driving the truck.

Jennifer & I had fun with the day. Things went very smoothly, though there are always hiccups. For instance, the end of the day came, and the camera truck, which had gone to pick up the tables & chairs, and linens (from Studio Inn Rentals & from Classic Party Rentals — our 11th hour heroes for making the sit-down reception possible as well as ensuring that it will look gorgeous!!) to drop them in Rolling Hills for the next day was going to get back to set 2 hours after wrap. The camera dept had left some camera elements in the truck because it was supposed to be back by wrap. (Ah, LA traffic). It was 5 pm, and they really didn’t want to wait hours for it, but felt there was no choice. Then we figured out that Anette would take the camera in her car, and that worked out well. They wrapped everything else for the camera into the grip truck, which left costumes, craft service stuff, one camera cart, and two grip carts to load into the camera truck when it returned. We Burtons and a good number of P.A.s and Jennie Yamaki & Sara Neff (& her sweet boyfriend!) stayed to do the loading.

Later in the day, Charity & Jenn left set to pick up the musical instruments at the Santa Monica Music Center, who is loaning a full rhythm section, with an upright bass that actually fits me. They came back as everyone was finishing wrapping out, and we needed to unload the instruments & reload them into the MANNA van.

Instead of moving the trucks & parking them in Rolling Hills (45 minutes away) or at a parking lot, the shop allowed us to back the grip truck up to the store, so no one could open the liftgate & rob it. That was good for everyone, so Sara drove the camera truck back to her house, and we sisters took the MANNA van (used for shuttling & errands every day), Charity’s truck (ditto), and I drove the generator with Charity. It was a ridiculously hilarious drive, with the truck’s horrific 2 nd gear making it buck like a bronco when getting up to speed, so that Charity was laughing the whole ride home, but it was fun. Home and straight to bed.

entry by: MD Dundon
It’s 9:24 pm and an hour after my bedtime on a long and exciting first day of shooting on The Happiest Day of His Life. Call (the time the crew is supposed to get to the location) was 5:30 am for our first location in Los Angeles, a working cake bakery called Topozio’s. Since I make the coffee and that takes an hour…I got to wake up at 4 am. Since that’s normally when I go to bed so it was quite a switch for me.

What an amazing place to shoot our first day. The show room for the cake store was stunning. That process of watching the original layout of the room transformed into several completely different sets for different scenes as the day progressed is a fascinating one. This film is being shot on 35 mm and the lighting and location gave it a million dollar look. The manager of the store, Anthony was amazing. He patiently showed us where we could set up, unload and put all of the camera equipment, lights, booms and sound equipment from two trucks that are needed for any shoot. You’d be amazed at how 50 people and all the props and equipment fit into such a small space. It always reminds me of one of those circus cars.

The various little areas on a film set are intriguing as well. While the shooting took place in the front room the area in front of the store is covered by black tarp and is filled with equipment that will be needed as the day progresses. Little knots of technical people are gathered (or stuffed) into the free spaces in the interior room. There is a constant flow of people in and out of the room as each shot is created, the lightening tweaked and the camera angles and moves practiced and modified for each part of the scene. In the back area there are producers and support staff furiously working on the details of pickups for the following days of shooting, getting more parking and soliciting donations of things still needed. This is also the area of the craft service table that has nibbles all day long for the cast and crew and a hot lunch. Out in the back in the parking lot there is a tent erected that holds the makeup and costuming for the shoot. There is also the main equipment truck and a host of people who aren’t needed at that moment for the shoot. It’s practically it’s own little city.

The film’s director, Ursula Burton (who is also acting in the movie), performs a wonderful dance of shifting attention to make her vision come to life as she works with the DP and crew, the actors and her own performance. The Director of Photography, Anette Haellmigk, is a real joy to watch as she works with the crew and technical details to realize the look and feel of what happens on film. The excitement level starts high and stays that way all day as the film being shot is absolutely stunning and the performances of all the actors are going beautifully. The presence of the well-known actors Jill Eikenberry and Michael Tucker seemed to help keep the energy of the day up. And seeing our groom in his wedding finery for the first time was a real treat…I won’t ruin it for you…you’ll have to see the movie. 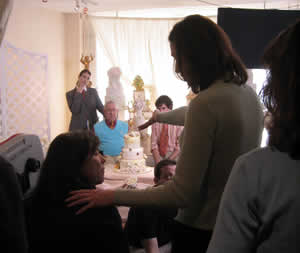 For me, a film set is always a fun place to meet and interact with some amazing people. The highlight of the day for me, since I spent a good chunk of it around the kitchen was meeting the chef, Jesus Ornelas, and hearing about how he creates the beautiful cakes that are his signature. Jesus and Anthony both make appearances in the film, so see if you can pick them out. I had to share this picture of this amazing cake that Jesus had made of Jack Skeleton and Jane from Nightmare Before Christmas. And all that made out of sugar – simply stunning. In independent filmmaking there isn’t enough that can be said about how the success of any low or no-budget film is dependent upon the generosity of people donating anything and everything you could imagine. But the kindness of Jesus and Anthony went further than that to make the entire day run more smoothly. Jesus even changed his schedule and baked all night to fill his orders so we were free to have the run of the place for a majority of the day.

The end of the day was a slight adventure as one of the trucks out on a delivery run got stuck in an enormous traffic jam and couldn’t get back for three or four hours after it’s expected arrival. Some creative thinking on the production staff’s part and the issue was resolved. The last die-hards of the production team loaded everything up on the trucks and prepped for the next day’s shoot. It was an amazing first day of filming.