MANNA FROM HEAVEN is a lighthearted comedic fable about what happens when you get a “gift from God” (a financial windfall), but many years later you find out it was a just a loan — and it’s due immediately. A feel-good film with a star-studded ensemble cast, MANNA is a delightful and refreshing comedy.

Once upon a time, many years ago, a neighborhood in Buffalo, NY is mysteriously showered with 20-dollar bills. Theresa, a young girl who everyone thinks is a saint, doesn’t have much trouble convincing her loose-knit “family” of relatives, friends, and two permanent house-guests that the money is a gift from heaven to split up. Years later, Theresa, who has become a nun, decides that it is time to pay the money back, so she calls the eccentric group back together to repay the “loan.”

The problem is, nobody has the money, nobody wants to give back the money, they don’t know to whom it belongs, and most of them can’t stand each other. Theresa has some tall talking to do to get this querulous group on board, but her gift was always to see the best in everyone, and she eventually wins them over. Each one of them starts doing it for selfish reasons (Bunny and Ed are con artists who think they’ll take the money and run; Inez, a hard-nosed casino card dealer is going to have no part in it until she starts falling for a secret service agent…) — but in the process, get caught up in their community and something larger than themselves.

What follows is an witty, intelligent, feel-good comedy about rediscovering hope at any age.

Through the ensemble comedy’s fun twists and turns, the characters (played by an all-star cast) learn about family, romance, reconciliation and redemption by overcoming the personal obstacles that have been holding them back in life — and the city’s community also blossoms in the process. By working together they begin to realize their full potential and each, in a moment of selflessness, finds the dreams they thought the money would buy them.

The heartwarming comedy is appealing to a wide audience, including young viewers, who know the film’s talented cast through classic and/or currently popular TV shows (“The Partridge Family,” “Batman,” “Just Shoot Me,” “Buffy the Vampire Slayer”), as well as to older audiences more familiar with the actors through their movies (“Oklahoma,” “The Last Picture Show,” etc.)

MANNA got the endorsement and support from:
Habitat for Humanity
Rotary Clubs
Kiwanis Clubs
The Conference of Catholic Bishops
Rabbi Gellman and Msgr. Hartman of THE GOD SQUAD
The United Methodist Council
the Bishop of Buffalo

What the critics are saying:
(See our Publicity page for full reviews and articles)

Liz Smith – NEW YORK POST
“A great little movie it is. Dig this cast… Several Oscar winners and nominees and even a Tony citation are in this amazing group. You’ll be hearing more about the Burtons!”

Ain’t it Cool News
“This movie has it all: a good plot, great characters and performances, hilarious moments, and genuinely touching personal moments…I’m generally pretty cynical, but I still really enjoyed this movie. I wish more good family movies like this came along.”

Patricia Finneran – IFP, NYC
“A wonderful testament to the generosity of the human spirit – something we are all needing right now!”

Gary Groman, BRANSON COURIER
“MANNA FROM HEAVEN is an entertainment blessing… A story of personal relationships and interactions involving some of funniest and most entertaining characters you will ever meet, human goodness, kindness, faithfulness, and, most of all, the miraculous wonder of dreaming and achieving those dreams.”

Synapsis Digital Magazine
“A truly original comedy, which will have the whole family laughing…. Delightful feel good comedy…[that] explores in a delightful yet insightful way the dynamics of the ‘modern family’…This movie has witty and thought provoking dialogue…I recommend [Manna From Heaven] as one…to raise the spirits.”

Michael Moore, Delaware Gazette
“A gem of a movie that the big Hollywood studios only wish they would get.”

Carl Gottlieb (JAWS, THE JERK)
“MANNA FROM HEAVEN is a marvel of ingenuity, character and comic invention.”

U.S. Congress Representative Karen McCarthy (D-MO)
“It is the perfect film for this moment in history. You’ll walk out of the film soaring.”

Senator Charles E. Schumer (D-NY)
“We don’t have enough of these movies. It says something wonderful about family.”

What audiences are saying:
“An excellently crafted film and a thoroughly enjoyable experience!” (IMDb): This film is a gem and a true piece of art. On all points of skillful, tasteful filmmaking, “Manna from Heaven” ranks high. The screenplay is superbly written, and it is difficult to imagine a better cast than that utilized by the Burton team. The cinematography and editing demonstrate a firm command of the film medium. If you like your movie-going pleasure laden with charming wit, beautiful scenery, and the right balance of sentimentality, this is the film for you.

“A lovely way to spend an evening” (IMDb): I had a wonderful time at the show, and my friends and I spent the rest of the evening talking about Manna. Splendid performances, great writing and cinematography: that’s what I call a moving picture.

“An uplifting comedy with twists and turns!” (IMDb): Extremely well written, cast and directed…Dialogue is witty, engaging and funny with characters that are a bit out there. It’s great to see a feature film that has a backbone to it and a theme of doing the right thing.

“Magnificent. # 1 Feel Good Flick”
“The Best – I cried with Joy!”
“Fantastic – See it again and again!”
“Reminded me a lot of a Woody Allen film. Great Stuff!”
“FABULOUS! BEST I’ve seen this year — maybe ever!” 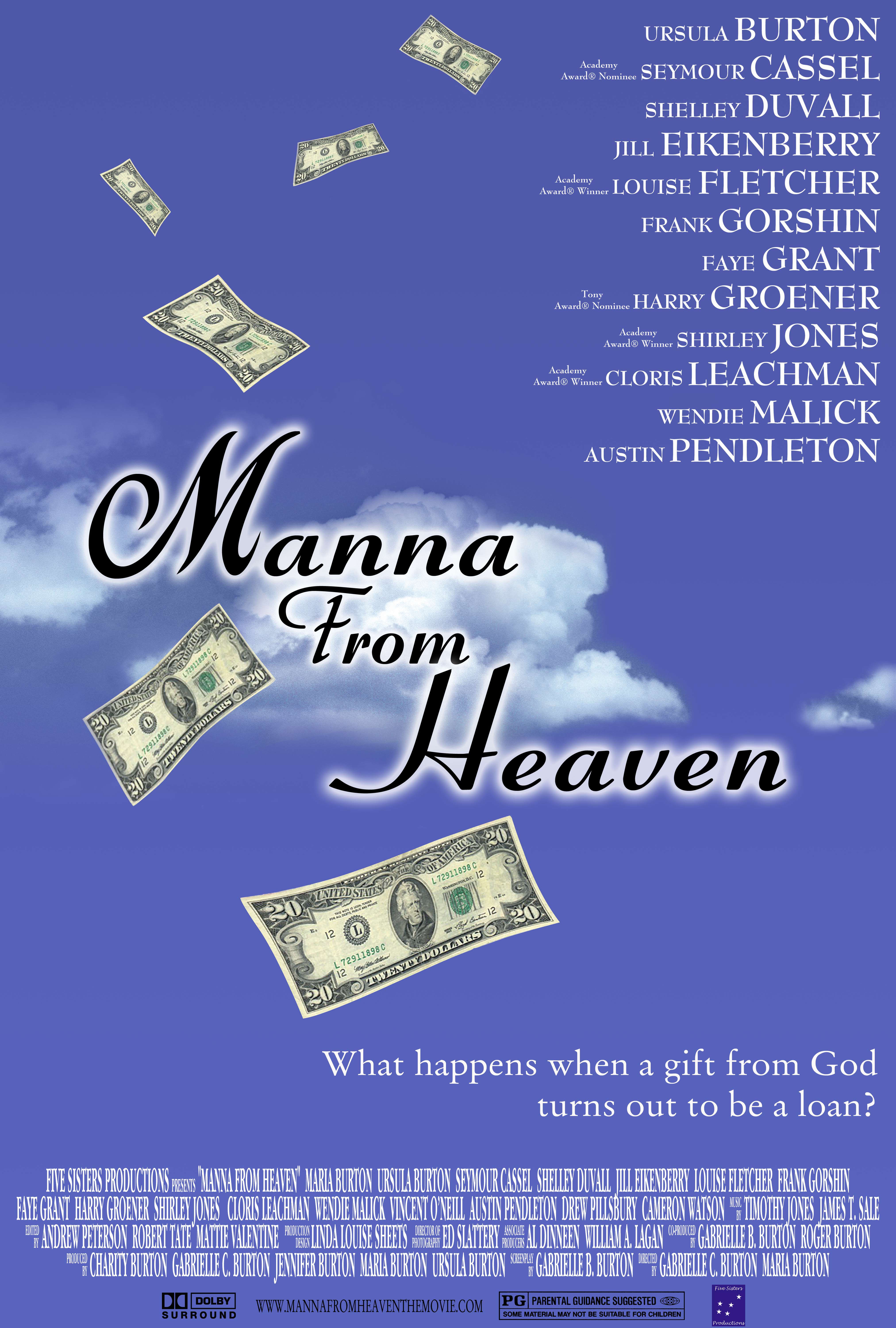 Selected to screen as an example of high quality American independent film for the United States Congress, sponsored by Jack Valenti and the MPAA