The Burton sisters make movies by following an unconventional script 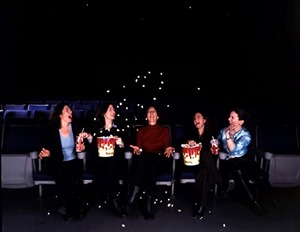 It could have been a swift executive decision. When Five Sisters Productions set out to pick a director for its current film, Manna From Heaven, it had an obvious candidate: Maria Burton, the eldest of the five siblings behind Five Sisters, who had been directing movies and plays for several years. But then another contender raised her hand: Maria’s younger sister Gabrielle, a film-school grad who wanted her first directing break.

At any other company, the boss would make the call and that would be that. But at Five Sisters there is no single CEO. Instead, all five Burtons-Maria, Jennifer, Ursula, Gabrielle and Charity-talked and talked about who would be the best choice. After much debate, they named Maria and Gabrielle as codirectors. “It wasn’t the obvious solution,” says Maria. “But when we came to it, I remember thinking, That’s it! That’s our answer.”

This hardly follows the usual Hollywood studio script of politicking and screaming matches. But at Five Sisters, rejecting traditional management styles is all part of the plan. Six years ago, the sisters decided to pool their energies to open a film production shop in Los Angeles. The result is part feminist collective, part family business (their parents, Roger and Gabrielle, work there, too). Their mission is clear: create movies they feel passionately about and work in ways that reflect their egalitarian spirit.

So far, the unconventional style is thriving, despite the brutal realities of independent filmmaking. The sisters’ first two movies, each budgeted at under $1 million, got them noticed by the film community. The first, Just Friends, turned a profit, and the second, Temps, is being developed into a TV series. Manna From Heaven, a comedy with Shirley Jones and Cloris Leachman, is more ambitious (at $4 million), and it may help them break onto the national scene. The film recently premiered in New York and Los Angeles; at press time, it had grossed nearly $400,000. Manna is a full family affair: Ursula has a lead role, their mom wrote the script, and all five sisters are producers.

If the thirtysomething Burton sisters seem to have a moviemaking gene-and one for collaborating-both showed up early. Maria, the oldest, started making movies straight out of Yale in 1985-with a ready-made crew: Ursula, who trained at Yale as an actress, and Gabrielle and Jennifer, grads of Harvard and also aspiring actresses. (Youngest sister Charity broke the mold, teaching kindergarten in the Los Angeles public school system, but is now involved in the company.) The idea of opening their own film shop took hold in 1997, and on a retreat to Mexico, they hatched a formal plan for the business.

Not everyone is sold on the Burtons’ egalitarian approach. So the sisters have to find ways to “make things comprehensible to those who play by the ‘usual’ rules,” says Jennifer. When they were raising money for Manna, one investor flat-out refused to sign a check until the company named a chief financial officer. The sisters tapped Jennifer for the slot and have since decided to appoint one sister CFO for each project. Investors get billing right along with the camera guys; the credits for Manna list dozens of contributors named as “guardian angels” or “earthly saints.”

With the release of Manna, the sisters have taken their unique approach on the road. Movies backed by major studios usually open in LA and New York and then go nationwide. But Manna is making that trek in reverse: It has built its audience slowly, leading up to the debut on the coasts. Last year the film premiered in a handful of Midwestern cities, including Kansas City, where it caught the eye of Peter Brown, CEO of the AMC Theatres chain. Brown agreed to run it in other AMC cities, a huge boost. All five sisters are helping to market Manna-on a shoestring, staying with old college friends as they travel to openings. “You need to keep going until you can pop up onto the radar” of the industry, says Gabrielle. “That’s how it happened,” she adds, for that new touchstone of indie dreams, My Big Fat Greek Wedding.

Back in LA, each sister draws a salary of $500 a week and additional pay for the various jobs she does. Charity still teaches, and the other sisters do occasional work on other films. Two of the five are married, but neither spouse-one a neuroscientist, one a music professor-is helping fund the company. A snarky film critic once suggested the sisters were being supported by their father. “So maddening,” says Maria. “Our dad is on our payroll.”

Building buzz for Manna is high on the agenda for the five Burtons, but another big decision looms. What should their next project be? It might be a historical epic, based on a novel in progress by their mother, Gabrielle. Or maybe a wedding satire dreamed up by Ursula. One thing’s for sure: The sisters will have a lot of good long talks about it.

“My Turn!” But Without the Whine
It’s not every family business that can handle sibling relationships, let alone build on them. The Burton sisters may have an advantage in the way their parents, writer Gabrielle and developmental psychologist Roger, kept peace when the girls were growing up. Trying to cut back on constant battles over who would get first dibs on toys and treats, the parents assigned each child a day of the week when she would get first turn at anything that came up. Maria, the oldest, got Monday, while the youngest, Charity, had to wait until Friday for her chance to be first.

The Burton sisters still rely on that construct to decide on who will speak first – or last! – when they’re debating a business decision together at work.

“It amuses me that they even remember,” says their mother, Gabrielle, laughing. “My husband and I didn’t see it as a philosophy when we were raising them. It just evolved day by day.”

Ellen Neuborne has written for BusinessWeek, Business 2.0 and other publications.
published in Working Mother magazine, June 2003