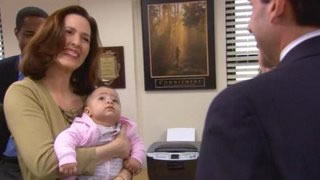 Today we are happy to publish a recent interview we had with Ursula Burton. You may have seen her in “The West Wing”, “The Practice” or in the film “Just Friends”. However, Ursula is a member of The Office Universe because of her role as Hannah Smotridge-Barr, the former Stamford employee who spends some brief time in Scranton.

Recently Ursula shared her TwoCents and Five Answers with us. Enjoy!

TwoCents: Could you tell TheTwoCents readers about yourself and how you started in “show biz”?
Ursula Burton: My mother is a writer and my father was a jazz musician before he became a professor, so the arts were highly valued in my family. It may sound strange, but becoming an actor somehow seemed inevitable to me. I studied acting at Yale University and then at Michael Howard’s Studio in NYC. Eventually I made the move out to LA.

TC: You’ve had roles on shows such as “The West Wing” and “The Practice”. What path led you to playing the recurring role of “Hannah Smotridge-Barr” on season 3 of “The Office”?
UB: The story I heard is that someone in casting had seen me perform while I was pregnant. The breakdown (that’s what the character description is called) said they were looking for an actor to play a breast-pumping mom — they called my agent and asked whether I had already had the baby and wanted to come in to read for the role. I auditioned and got the job!

TC: What was the experience like working on a hit show like “The Office” that really focuses on the entire ensemble?
UB: Working on THE OFFICE is really, really fun! When I got the job, I had just had a baby and was sleep deprived and was spending every tiny break pumping breast milk (isn’t it funny how life imitates art!). The cast is eclectic — all with different backgrounds and performance styles — and they made me feel really welcome. I have to admit, I am amazed that on such a hit show the cast and crew are so warm.

TC: Do you have any websites that you like to visit for your own entertainment?
UB: Between acting and the production company I run with my four sisters (Five Sisters Productions), I have very little time to surf. I do my best to keep up on political and environmental sites, but now I’ll have to add TheTwoCents.com!

TC: Can we look forward to seeing you in anything soon?
UB: Yes! My directorial debut, THE HAPPIEST DAY OF HIS LIFE, in which I appear alongside Jill Eikenberry, Michael Tucker, Seymour Cassel, Jared Hillman, and a bunch of other terrific actors, is about to premiere on cable. I’m also attached to a British pilot where I’ll play a sex therapist — so stay tuned!

**TwoCents Bonus Question**
TC: If someone were to climb off a desert island and only have time to watch five movies to learn what American cinema is all about, what five movies would you show them?
UB: I LOVE movies and my tastes are varied, but I’m grateful that you excluded foreign films and that they don’t have to be my favorites, just movies I think exemplify American cinema. So, off the top of my head…

The Wizard of Oz is quintessentially American: technicolor, rich, and wonderful, while promoting the idea that home is the best place.
Sullivan’s Travels, because it’s about discovering the real America through the eyes of a fluff film director.
Singing in the Rain – musicals are such an important part of our entertainment culture, and I grew up on them. This one is about talent and goodness coming out on top, and includes the all important love story — how American is that?
For the modern independent I’d recommend a double feature: Little Miss Sunshine, because, not only is it a charming indie, but it incorporates the road movie, which is very American — the fact that the wonderful Steve Carell is in it is a perk! — and, of course I have to include my company’s film, Manna from Heaven — a true grass roots indie that my sisters and I promoted around the country and MGM/Sony released.
And for the blockbuster/sequel movies, X-men is great American fare — about discrimination, couched in huge budget studio/ special effects package.

We really appreciate Ursula taking the time to share her TwoCents with us here! Be sure to keep your eyes open for “The Happiest Day of His Life” on cable! Hopefully now you’ll watch some of those Season 3 DVDs and appreciate Hannah(Ursula) all that much more!