Ursula Burton’s character, Hannah, gets a foot in The Office and she likes what she sees

By Debi Enker
The Green Guide – THE AGE

IF THEY hadn’t been excised during editing, Ursula Burton’s dialogue debut on The Office wo 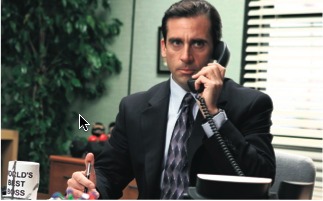 uld have constituted three little words: “Do you mind?” With that slightly irritated rebuke of a colleague, the screen life of Burton’s character, Hannah Smotridge-Barr, would have stepped up a notch. She would have progressed from being a fairly anonymous figure behind a desk in the Stamford branch of the paper company, Dunder Mifflin, to a slightly more prominent player.

In essence, Stamford represents office #2 in the comedy series. It’s the branch to which wounded salesman Jim (John Krasinski) fled following his crushing rejection by receptionist Pam (Jenna Fischer) in the Scranton branch at the end of the show’s second season.

Although her first scheduled words hit the cutting-room floor, Hannah starts to speak in “The Merger”, the eighth episode of the currently screening third season and her first word is now “Hello”. It’s the episode in which the feared rumours of the union between the Scranton and Stamford branches come to fruition and The Office starts to resemble Survivor: who will be eliminated when tribes merge?

Burton’s multi-episode engagement began in season three. An actor, writer and director who was a guest at the recent Melbourne International Film Festival (MIFF), she found herself joining a series that has become something of a sleeper success, one that had defied early doubts and an initially lukewarm audience response to win viewers and critical accolades. It’s become The Little Clone That Could.

Adapted from the loved and revered British series written by Ricky Gervais and Stephen Merchant, the American version of The Office premiered in the US in 2005, beneath a cloud of scepticism. Foreign shows don’t have a history of travelling well to the US for adaptation, and comedies, with Ugly Betty representing a rare exception, can be particularly tricky.

Over the years, there has been the odd successful transition: Till Death Us Do Part to All in the Family in the early ’70s and Man About the House to Three’s Company a little later. But there was good reason to suspect that The Office, an understated, uncomfortable, closely observed British gem, wouldn’t translate well, that its quiet, sly style would crash head-on into American comic sensibilities.

But the US version has proved be a stayer. In a rare show of patience and faith by a TV network, NBC allowed it time to grow, develop its own style and woo an audience. In return, The Office has emerged as a serious player at a time when quality comedies aren’t exactly flooding the small screen.

It won the Emmy for outstanding comedy series last year, and in July the US Television Critics Association also awarded it the best comedy gong. Earlier this year, at the Screen Actors Guild Awards, the cast received the award for outstanding performance by an ensemble in a comedy series.

For Burton, the opportunity to join the show in what was to become a recurring role came at a good time, and that feeling was evident on the set.

“The cast and the crew, instead of feeling entitled, feel like they really earned it. You can’t fake that: they’re really happy about it and feel lucky. It’s really a nice environment.”

“Sometimes when you walk on to a show and you’re a new person, you don’t know what’s going to become of you. Other people can be absorbed with themselves, some might feel like they’re the stars and they can’t be bothered with you, they don’t know how long you’ll be around. Sometimes if they’re on a show that’s doing well, actors get a little entitled. But on the set of The Office, new people came in and the regulars said it felt like a first day at school: it was extremely welcoming, it wasn’t like, ‘You’re taking my show’.”

Burton, who wrote, directed and starred in the comic, genderbending short film, The Happiest Day of His Life, which screened at MIFF, describes her Office character as “a family person. She’s a mum. I think of Hannah as someone who is very happy in her life outside work and she just does the job because she has to do a job. So anytime there’s any bit of her outside life that comes into the office, there are glimpses of happiness. But the majority of the time she’s somewhat sour and irritated to be there.”

However, there are times when her life beyond the workplace intrudes, causing the kind of ripple of discomfort that would be familiar to regular viewers of a show that’s all about unease. Hannah’s behaviour, says Burton, can be inappropriate. For example, enthusiastically sharing happy snaps that are perhaps best left to the privacy of the family album. Or expressing breast milk at her desk. “She pumps openly in the office,” says Burton with a grin. “I have fed a baby in public and I have no issues with that at all but, but as much as possible, I would do it in a way that would not make people feel uncomfortable.” Hannah has no such concerns.

Burton and her husband, comedy writer Darin Henry (Seinfeld, My Family), are great fans of British television and were admirers of the original Office. But in her view, the success of the American version came from the local writers and producers finding their own voice and style, while not sacrificing the qualities that made the original such a standout.

“I think at a certain point they realised that they had to make it an American thing. There’s a marked difference between the two. The American version is more brassy and broad, more American in character. More cartoonish.” Carell certainly appears to have accomplished the impossible, turning Gervais’ indelible David Brent into his own distinctive Michael Scott, a similarly shifty, awkward, tryhard boss, but one with a discernibly warmer heart.

As for Hannah and her colleagues at Dunder Mifflin — a paper company as eloquently named as its British counterpart, Wernham Hogg — they also manage to convey the petty irritation of a dispirited staff at an unexceptional business. And now they’re anxious about who will survive the rumoured merging of the Scranton and Stamford branches.

The Office screens Mondays at 10.10pm on Ten.